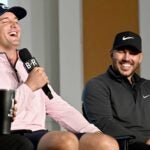 Bryson DeChambeau, left, and Brooks Koepka ahead of the Match.

Brooks Koepka, during last Friday’s Match, was walking off the 7th green at Wynn Golf Club with a 3-up lead when he was asked by one of the broadcast’s analysts, six-time major champion Phil Mickelson, what he would say to his friends “to rough them up,” given his advantage. Koepka nodded to the Match’s TV-14 rating.

Mickelson, thinking that Koepka was answering only to what he might say to Bryson DeChambeau, his Friday opponent, asked again, emphasizing that any smack talk would just be for “your boys back home.”

“Yeah, I still can’t say that on air,” Koepka said. “Some of my boys are watching right now, and they’re thinking the same thing.”

In the spirit of the moment then, this is maybe the best way to sum up the exchange:

While the answer left us to imagine the potential jabs, it also lacked any punch. You can’t blame Koepka — he knows the consequences of getting a little too colorful. On the PGA Tour. But this is the Match, with Sin City as host, Charles Barkley as the second “analyst” and potentially less censors than, say, the Wyndham Championship.

And that, dear fans of the Match, is one way to make a good thing even better. While its five editions have mostly delivered, the now-regular event also can be improved. Here are some ways to do it.

Real money on the line

To date, the Match has been played for charity. And we’re not suggesting that change. It’s one of the best parts. But how about this fix: Instead of sponsor money, make it the player’s own cash. You want Bryson and Brooks looking a little more lively? Ten million bucks would heat things up quickly.

We’ve heard tales of the cash games that are played during practice rounds. (If you believe the stories, they are practically Mickelson’s second job.) And even among the celebrity set.

“We were playing golf one day, and I think we were playing for $1,000 a hole,” Barkley said, on an episode of GOLF’s Subpar podcast, of a round with Michael Jordan. “And I was shaking over this putt. And he says, ‘That’s good.’ It was a good-sized putt. He says, ‘Hey, you might step in my line. That putt is good.’”

Curious, Barkley asked MJ how much his putt was for.

There are two ways you can do this. One, bring in the game’s best talkers — Kevin Kisner, Pat Perez, Max Homa, et al. Kisner, in fact, was so frustrated by the lack of smack in the fourth Match, played this summer between the teams of Mickelson and Tom Brady, and DeChambeau and Aaron Rodgers, that he was willing to jump in. That day.

“I should commentate the back nine,” he tweeted. “These guys need a lesson in talking trash.”

Or, the second option would be to match up friends. If you thought Justin Thomas’ smack talk of Barkley was good when both were announcers for the second Match, think of the words between Thomas and buddy Jordan Spieth. When the opponents genuinely do not like each other, you’re often left with cliches and cringy interaction.

Like bringing in cupcakes with your opponent’s face on them. Sorry, Bryson.

To date, nine men have played across the five matches. And zero women. But tell me you’re not interested if the Match again went the basketball route, as it did in the third Match, and pitted, say, Nelly Korda and Barkley against Jessica Korda and Jordan. Or if you went the bomber route and had a team of Lexi Thompson and actor Bill Murray facing a team of Anne van Dam with Ray Romano.

Or you went the talker route and included a Christina Kim or a Mel Reid. Let us never forget these words from Reid to our Sean Zak, who once filmed a workout video for GOLF.com with Reid:

“Bodyweight for you, Sean, is very different, lol, skinny thing. Must be all that posh yoga you do in NYC.”

‘If two 15-handicappers played for $1 million, would you tune in and watch?’

The final thought is one you’ve seen before on these pages, but still is worth considering. Last year, our Alan Bastable pitched the following idea:

“A network announces tryouts for a new reality show for golfers of ‘average’ talent — say, somewhere in the 13 to 17 handicap range. Through that process, the producers identify a couple of players of nearly identical ability and with big personalities that would play well on TV. Weeks later, boom! The producers surprise the two finalists at their homes and tell them that they have 24 hours to meet at the Pebble Beach pro shop. (Any brand-name course would work, but we’re aiming high.)

“Fast-forward a day and the players roll into Pebble looking bewildered. No range time, no practice putts, nothing. Next stop: 1st tee, which is enclosed by a packed grandstand (we’re assuming a post-Covid timeframe). Cameras are everywhere. When they arrive on the box, the contestants are informed that they are about to play one another in match play — for $1 million. Life-changing money. Winner takes all. Oohs, aahs, dropped jaws. But that’s not all! The first-tee announcer reveals that each player will be captained by either Tiger Woods or Phil Mickelson, who at that moment stroll on to the tee. Coin flip decides who will captain whom, with another million bucks going to the winning captain’s charity of choice.

“To make things even more interesting, the captains will also serve as lifelines. The players may elect to have their captain step in and play any six shots on each side (with a maximum of three tee shots per nine).”

Why does this work so well? One of the best parts of the second Match was when one of the greatest of all-time, Tom Brady, looked like one of the worst, as he sent shots flying every which way and ripped the backside of his pants down the middle. He was relatable. This concept would no doubt have that.

We also tossed out the following question to our friends on Facebook and Twitter: What changes would you make to the Match? Their answers are below:

Is the worst over for Indian equities despite Omicron-concerns?

What is Lewis Hamilton’s net worth and salary? How much money does he make?

OPINION: Wordle of the Day: M-O-N-E-Y – The Oracle

Get our latest downloads and information first. Complete the form below to subscribe to our weekly newsletter.